Skip to main content
Home » About Us » Shavano Park, TX

Jensen Eye Clinic serves residents of Shavano Park. The city of Shavano Park, TX is located in Bexar County, 12 miles north of downtown San Antonio. The city was originally established along the Olmos Creek and was used as a stagecoach and rail stop between San Antonio and Boerne. The current population of the city is 3,527.

Shavano Park has its own water system, police station, and fire station. The drinking water is pumped from the Edwards Aquifer and the Trinity Aquifer. The city also participates in a Hazardous Material Spill Response, Containment, and Clean-up program. 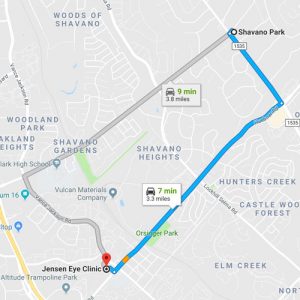 Blue light is a cause of computer vision syndrome (CVS) and sleep disruptions.

Whether you're 5 or 65, we use the latest technology to be preemptive in our diagnosis.

We are always receiving new arrivals for kids and adults in a variety of styles, colors and materials.

Dry eye syndrome is a chronic condition that develops when your eyes do not produce and maintain enough tears to keep the eye’s surface lubricated.